The French singer and composer Patrick Fiori first came to Russia in 2008 as a part of his “Les choses de la vie” tour. On the 2d of December 2008 he gave a show at the Kremlin Palace. The audience heard the smashing hits of Fiori as well as the songs from the last album and Phoebus arias from the popular Notre Dame de Paris Musical. The show on the 2nd of December saw such hits as “Je sais où aller”, “Que tu reviennes”, “Marseille”, “4 mots sur un piano”, that had long become French music’s goldies. Euro Entertainment was the local promoter of the Moscow event.

In 2011 Patrick Fiori came to Russia as a part of the “L’instinct Masculin” Tour. On March 3rd and 4th, 2011 the stage of Moscow Estrada Theatre saw two performances of the star of the original “Notre Dame de Paris” cast, the first artist to play the captain of King’s Archers, the handsome Phoebus. The musician not only performed his famous hits, but also presented his new, eighth solo album “L’instinct Masculin”, that had gone platinum in just three weeks after the release. The show employed original lighting and sound capabilities of the venue that also boasted the rich history and is located in the heart of Moscow – Estrada Theatre. Euro Entertainment was the local promoter of the Moscow event.

Patrick Fiori was born on September 23 1969 in Marseilles, later on his parents moved to Corsica. He grew up in a big ethnically mixed family: his Corsican mother and Armenian father were bringing up five children. Theirs was not a wealthy family, so Patrick would take on any job: he used to work selling pizza, mending electricity and even as a decorator. But even in need, Fiori’s home was always filled with music.

“Since I remember myself, I have always been surrounded with music”, — recalls Fiori. “When I was a boy, my sisters used to sing with me and lull me with old time songs. Everyone sings in our family, even my father who composes and improvises despite his modest vocals”.

Fiori’s scenic debut took place when he was 12, on the stage of Marseilles Opera. Fiori quickly gained recognition and was soon invited to the talent show “Les Habits du Dimanche”, where he wins both the viewers’ sympathy and the highest grades from the experts. This project becomes the starting point in Patrick’s career. In 1992 he becomes the focus of public attention again, after the victory in the French Song contest.

Just like the legendary ABBA, Patrick Fiori becomes a real success after his performance on Eurovision contest. In 1993 the singer represented France in front of a multi-million audience in Europe’s biggest musical contest. His song “Mama Corsica” dedicated to his home country won Fiori a place in the top five singers. Eurovision made Patrick’s voice recognisable by the public and his talents known and interesting to songwriters, and in 1994 the artist released his first solo album, that was successful in France.

Then came around “Notre Dame de Paris”, that has changed the artist’s life and career for good. 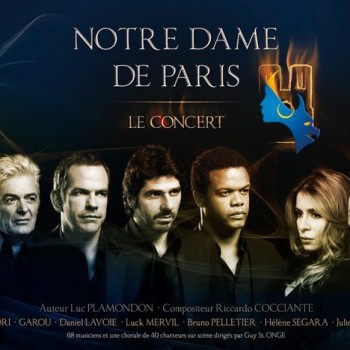